Posted on September 15, 2017 by sandraleecleary

In the world you have tribulation, but take courage, I have overcome the world. John 16:33 (NAS)

Today is a very sad day. I received word this morning that a dear writing friend passed away on Wednesday. I’ve know her for close to ten years as she was in my writer’s group of The Christian Writers Group of Greater San Antonio. She’d written a series of children’s books and looked forward to getting them published. Her first one, The Many Tales of Mitzie The Mouse just hit the streets about three weeks ago. Her face lit up when she opened her first box of books. 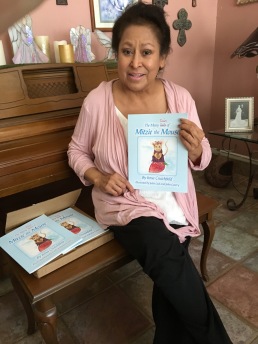 Franklin Scribes Publishers were excited to publish her book. A company founded by another wonder man, John Mills, who belonged to our  group and preceded Irma two years ago. Upon his passing my friend, Judy, and I took over the ministry of publishing books for struggling authors. I can almost see it now Irma talking to John and telling him all about her book.

Irma Crutchfield was not only a writer but with her husband, Monty, foster parents. They not only had children of their own but opened their hearts and home to others less fortunate. Each one of us in the group prayed with Irma over her foster girls and her children. A beautiful Christian lady with a heart as big as her personality. She is going to be truly missed by each one of us.

RIP Irma Crutchfield. You are going to be missed.

This entry was posted in Uncategorized. Bookmark the permalink.

4 Responses to LIVING WITH SANDIE LEE