Posted on August 18, 2017 by sandraleecleary

It’s Friday already. Another week down. Where is the time going? Well I did have a pretty good week if I say so myself. Got my devotional written, worked on my DNA book, and found a good amount of information on Cibolo. Well maybe not Cibolo, but about the stagecoach lines in Texas. Thank you Jean Heide for your knowledge on stagecoach lines and hard work collecting information. 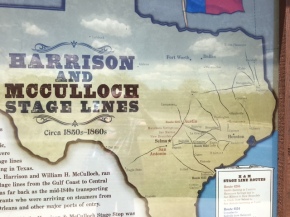 And of course one bit of information leads to another.

I had to deliver a picture frame yesterday and ran into a person who offered still another small tidbit of info on Cibolo. I just have to keep asking, someone knows something. Of course, there were two other people standing next to me that chimed in saying they have that book too…somewhere. All three promised to look for the book. Actually it is an old cookbook from Cibolo, 1979 they thought, and it contained a little bit of information about old Cibolo.

Sometimes I think I’m on information overload and I wonder where I’m going to insert it in the pages that keep growing. But, I’ll find a way.

On my few free minutes of the day I go to Ancestry and look for more of my ancestors. I found a goldmine on my Carr family. In the census they say they came from Canada and since I just visited Quebec, Montreal, and Toronto, I figured I’d delve into their beginnings. They came from Scotland (that was a surprise), and not sure of what port they landed in. They went to Massachusetts, then on to northern Vermont and southern Canada. Since the time frame was early 1700’s the borders were changing. Some stayed in Vermont but my up line crossed the border to Quebec. Interesting because then my third great grandfather went west to Black Hawk County, Iowa where he farmed and stayed passing away.

So that is where I’m at on my side of the family. Now to get caught up on hubby’s side. I’m still trying to figure out where his great grandfather died. There are still loose ends on his side of relatives that need to be taken care of. Oh, did I tell you hubby and I are related now through the Bradstreet line and also our Richardson line. What a hoot. Of course, it is way back there in the late 1700’s but who would have thought!

I need to sign off so I can get more work done on both books. So until then my friends………………..

This entry was posted in Uncategorized. Bookmark the permalink.